The Sniperley roundabout has long been a barrier to active travel in Durham. It is true that there are off-road cycle and pedestrian paths all the way round the roundabout, with refuges to cross to the middle of each arm. But all of the entries onto the roundabout, and most of the exits, have two lanes. If you are on a bike or on foot, this means crossing two independently moving queues of vehicles to reach the splitter island, either of which might start moving when there is a gap in the circulating traffic, Drivers will generally focus on getting onto the roundabout, and may not be aware of people crossing between the queuing vehicles.

Pedestrians and cyclists have a hard job to stay safe. When cycling with children it is not unusual to have to wait several minutes for a safe opportunity to cross just halfway across an arm of the roundabout. Poor visibility at Southfield Way, for example, gives only 3 to 5 seconds’ warning of approaching cars. These challenges have been reflected in our Durham Cycling Tube Map where the junction has been coloured red. SPACE for Durham has applied the Junction Assessment Tool from Appendix B of Cycle Infrastructure Design (LTN 1/20) to the current roundabout. It scored a measly 10%.

DBUG, the bicycle user group based at Durham University, raised the Sniperley roundabout in a submission on the County Plan in 2013. A review of Durham City strategic cycle routes by Transport Initiatives, prepared for the Council in 2014 recommended signalising the roundabout and providing “advance detected crossing links over the splitter islands” at a cost of £450,000. Some local people wrote to the council in 2017 to ask for safe crossings, but the officer responded that other locations in the county would have to take priority. Meanwhile people continue to vote with their cars by driving children from north Durham to the schools in Crossgate Moor and Neville’s Cross. The Durham City Sustainable Transport Delivery Plan, adopted in 2019, identifies the need to “ensure that adequate cycle priority (and protection for cyclists) is provided at the Sniperley roundabout at the junction of the A691 and A167″. Earlier this year the City of Durham Trust urged for better pedestrian and cycle facilities to be provided, in its responses to the Sniperley Park planning application and the Council’s masterplan.

In February we obtained via a Freedom of Information request, a report prepared for the Council which models various options and identifies a preferred design. It is radically different from anything else in the area, with a path actually crossing the interior of the roundabout, and could be a great improvement. We have taken the plan and coloured the shared-use paths in blue to help them stand out. The pink crossings would all be controlled by lights. The panels with the coloured arrows show the red/amber/green ratings for the possible cycling and walking movements through the junction. We are pleased to say that this new design scores 85%. 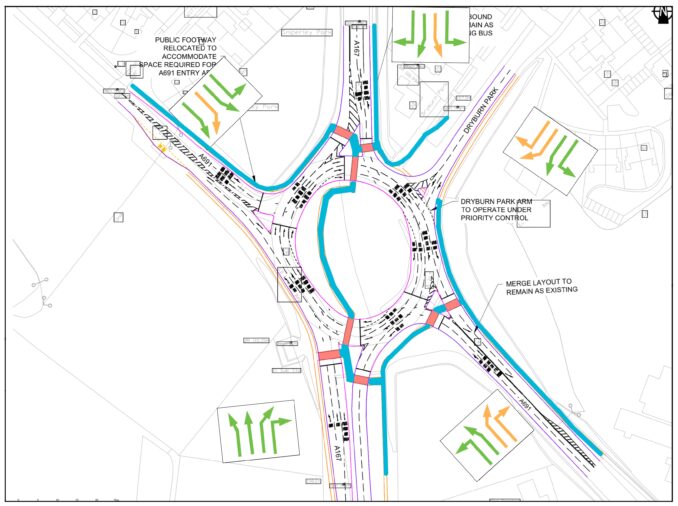 In some cases we have assigned an amber score because the safest route is much less direct and cyclists would be likely to risk using the uncontrolled crossings or the roundabout carriageway. At least if you cycle on the roundabout itself, you have the right of way as you pass each entry, but when cycling, people should not be forced to choose between ‘safe’ and ‘fast’.

Note that there may still be scope for improvement in the directness of the cycle routes through the junction. Travelling from the Sniperley development along the A691 cycle path and heading towards the Durham Johnston School along the A167 involves an unnecessarily long loop northwards to gain access to the path on the central reservation of the roundabout. More direct access from the A691 to the centre looks to be achievable by enlarging the triangular island at the A691 turning, as the signalisation would not need amending.

The proposals do include widening the carriageways and increasing the number of lanes in some cases. Given that the Council’s Climate Emergency Response Plan 2 recognises at last the need to reduce car use in conjunction with moving to electric vehicles, we would hope that this aspect can be looked at afresh: saving money on unnecessary road widening might free up resources to improve cycling and walking routes elsewhere.

This site uses Akismet to reduce spam. Learn how your comment data is processed.